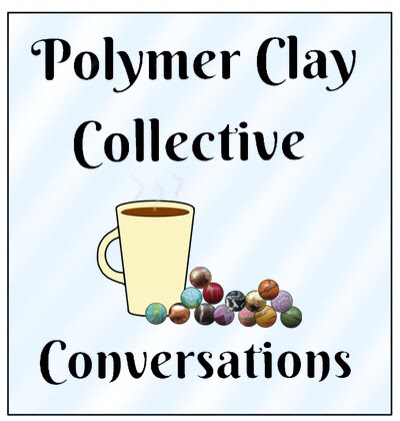 The Polymer Clay Collective is a super-friendly facebook group dedicated to all things polymer clay and for all levels of experience from 'just starting to dabble' to 'Wow! How did you do that?'

They have recently launched a fortnightly guest spot feature called “Polymer Clay Collective Conversations” for members of our group to introduce themselves and their clay experiences. Each featured member is posed the same set of questions, with one additional question posed by the preceding featured member.

The very talented and beautiful Linda Britt trail-blazed this feature and you can find her PCC Conversation here.

So with no further ado, here's my conversation piece:

• Tell us a bit about where you live.
We live in the middle of Kinglake National Forest in Victoria, Australia. A beautiful spot on top of a hill surround by rampant greenery and tall, lanky gum trees that like to surprise us by falling over in the middle of the night with a big KABOOM. 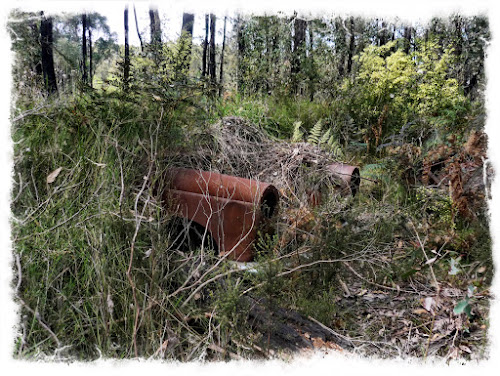 We have to share our house with many freaky little critters. I gave up long ago trying to keep them out.

There's a cute little dunnart - an eensy little marsupial mouse - that likes to pop in and torment the cats at night time. He happily snuffles up all the dead insects behind the furniture and in all those hard to reach places. (Photo by Nick Rains). 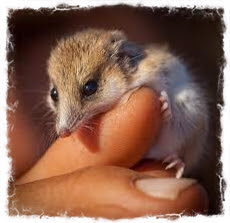 There's Grumpy Wombat who has stomped out his paths and trails and woe-betide anything that accidentally gets left in his way. It WILL get pooped on. If you haven't seen it, Diary of a Wombat is hilarious (it's MY book not the kids') and perfectly describes our Grumpy Wombat. 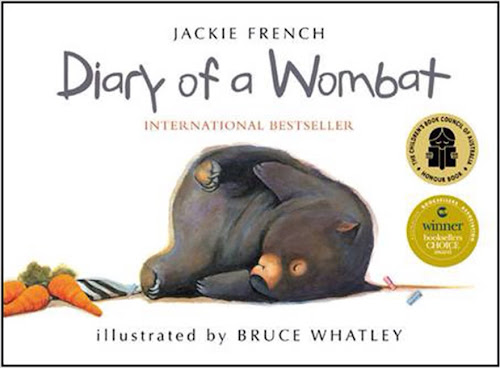 There's a whole bunch of possums that sound like a bunch of fairy elephants parading across the porch and roof at night.

There's cheeky swamp wallaby who sneaks up onto the porch at night and eats my succulents.

And of course there's a HUGE amount of freaky creepy-crawlies and things I can't even begin to describe. No idea what this fellow is below, but visit us he did. 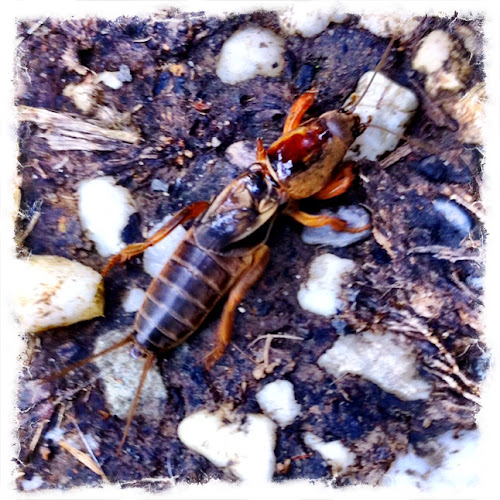 • What do you do when you're not polymer claying?
Quite frankly I'm lucky to get a couple of hours a month to play with my beloved clay! Most of my time is spent keeping my even more beloved two little kids and big ol' hairy-hubby clean, fed, happy and out of mischief. 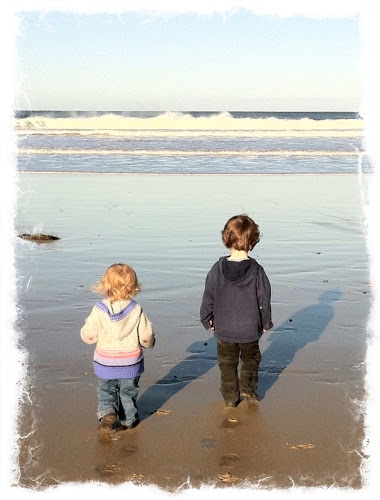 • What did you want to be when you were little and do you think you ever will be?
I wanted to be David Attenborough. And no, I don't think that's going to happen! But living where I do, I get to indulge my love of creepy-crawlies and natural stuff. 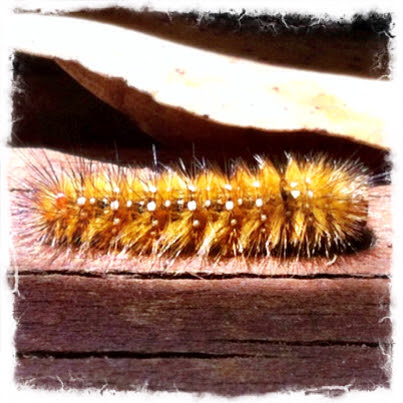 • Tell us something about yourself that we don't know.
I'm a qualified motorbike mechanic and once appeared in a motorbike mag (can't remember which, it was such a long time ago). Oh yes, there I was, all (not in the slightest) sexy in my blue workshop overalls with a dismembered engine block in front of me and a grubby screwdriver in my hand. I was chuffed to bits and you could see it written all over my face! 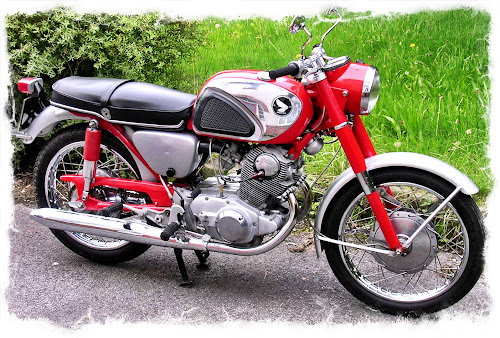 • Tell us your polymer clay story: What made you first try polymer clay and how long has PC been part of your life?
I first came to PC about two years ago when I was searching for 'life outside of family'. I was trawling Ebay for anyone getting rid of their craft stashes and came across a bunch of PC stuff. I thought it might be something that would both satisfy my need to do something for myself as well as be something I could do with the kids. It very soon became an obsession!

• What's your favorite PC technique?
Oooh ooh ooh anything that I can use my extruder for! I treated myself to an extruder last year sometime after I became fascinated with retro canes. It's so much fun! It takes me back to childhood and those little creatures that sprout play dough hair when you squish them. Below are some swirly rainbows I made based on Mia Rox's Rainbow Filigree Lesson. 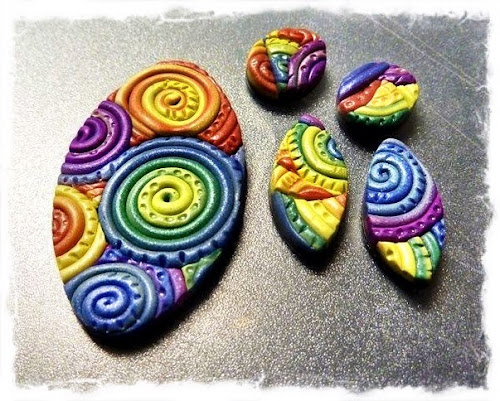 • What are your art/design inspirations?
Now that's a question I don't know how to answer. Even though I first came to PC a couple of years ago I am still pretty much a newbie because I don't get to play very often. Most of my inspiration comes from Dani of The Whimsical Bead and all of the amazing ladies that go there. Below is a picture from one of the workshop Dani runs - 'Spring time in Polymer'. 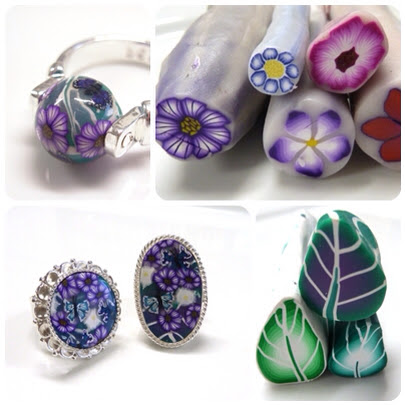 • Show us something you’ve made with polymer clay.
This is my favourite bracelet - based upon Randee M Ketzel's Crazy Hearts tutorial. 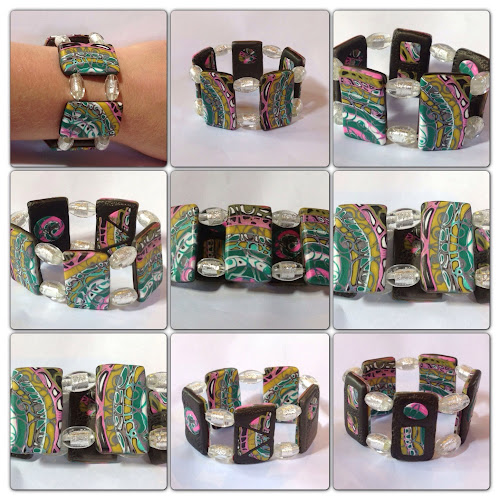 And the random Question set to me by the previous Conversations participant, Linda Britt of Linda Britt Design:

• How did a life-changing event affect your work in polymer clay.
It was actually a life changing event that set me on the road to discovering PC in the first place.

There were some horrific fires back in 2009 that swept through the forest killing many, many people and leaving even more homeless. It was horrific. The forest was utterly silent, empty and devoid of life. Even after the big fires died down the forest was still burning and little fires would break out suddenly months later. Yes, months. The aftermath was horrendous.

That's when my search for 'something' began, and that search ultimately led me to PC acouple of years later.

I am utterly absorbed when I have my clay playtime. I don't mind in the slightest that I'm not very good at it or that I don't really make anything useful or beautiful. It's simply the act of creating, molding, shaping and mixing colours that draws me. A perfect meditative medium!

And now for my random question for the next artist on the15th August 2013 -- Domarita Lopez-Wilcox:

• What is the most outrageous thing you have ever done to cheer yourself, or someone else up?

I hope you've enjoyed this post, if you are interested in joining the Polymer Clay Collective drop me a line or search for us on Facebook.

Thank you for taking the time to leave a comment :-) 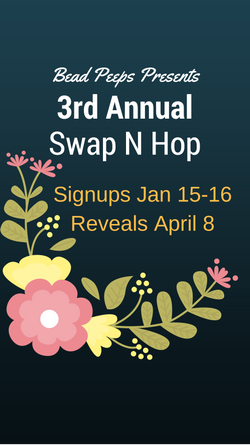 Nelly May
My wee 'uns and I take pleasure in making 'stuff' from anything we can lay our hands on. Thanks to a very kind, and often bemused, better half Our home is bursting at the seams with our creations.

The Color of Dreams 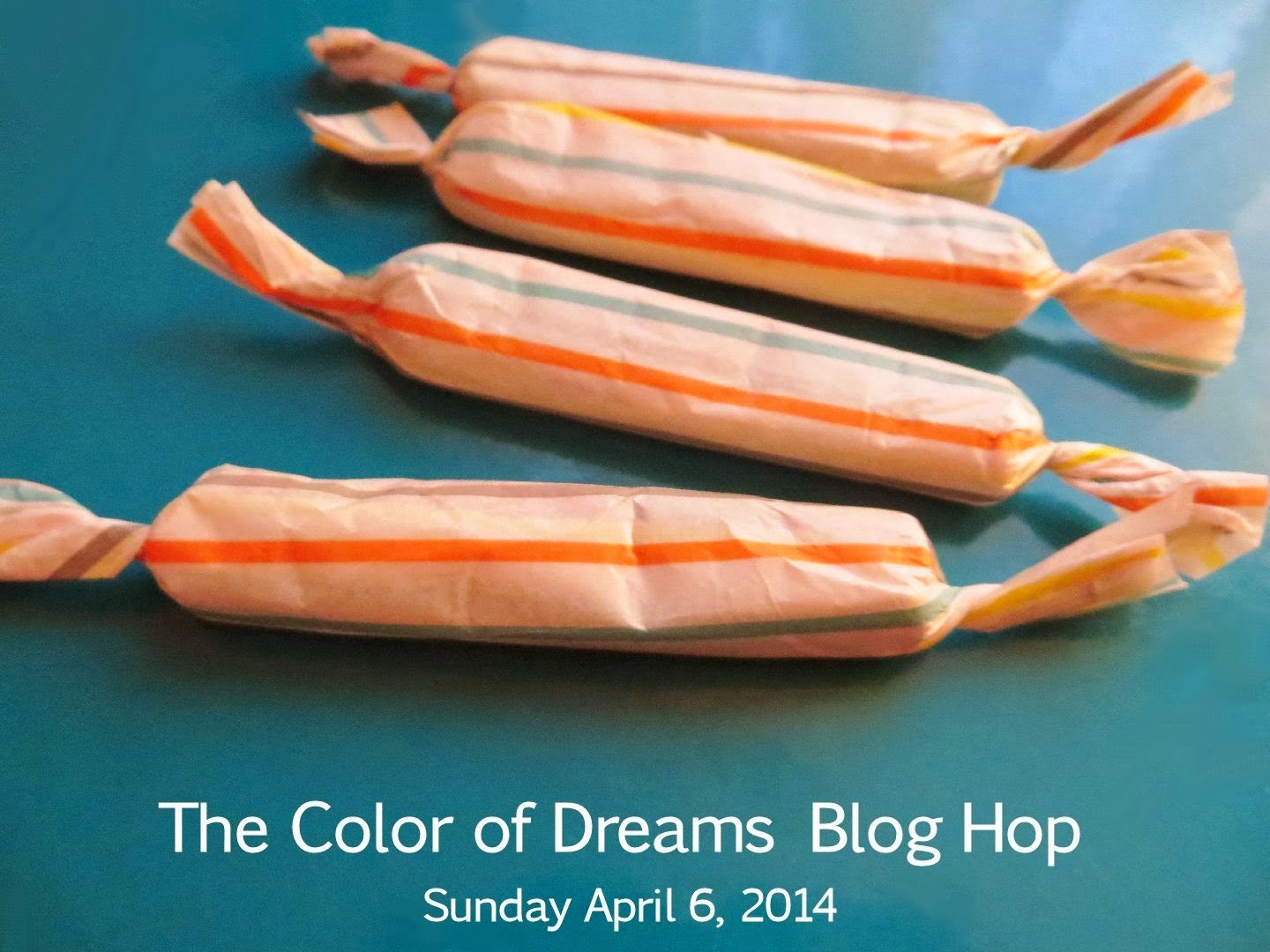 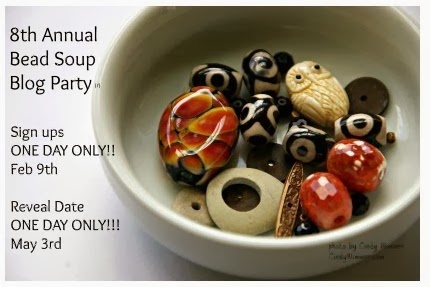 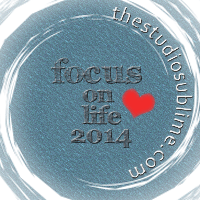